A Brighter Day for LED Bulbs

How Minnesota makes conservation pay for utilities—and how we could do more.

Minnesota’s largest electric utilities doled out more than $62 million in rebates and other incentives last year to help customers upgrade to more energy-efficient lighting, appliances, and equipment. That’s a tenfold increase from 2007, and that spending spike has fueled a new cottage industry of consultants and companies that help businesses capitalize on the flurry of financing options.

One example is Solus LED, LLC, a St. Louis Park lighting company that started at the end of 2011 and specializes in ultra-efficient light-emitting diodes, or LEDs. In one typical project, Solus helped an Uptown salon, Evolution Hair Studio, upgrade to LED lighting with a $2,400 rebate from Xcel Energy, Inc. The project cost $7,400, and it will save the small business about $1,600 a year on its energy bills.

“Customers will ask us: ‘Why would Xcel do this?’” says Niral Patel, President of Solus.

The tagline on Xcel’s energy conservation advertisements is “Responsible by Nature,” but in reality, government nurture plays a role, too, and it helps explain Minnesota utilities’ recent enthusiasm for lowering customers’ energy bills.

Minnesota, like several other states, compensates utilities for revenue they lose due to the success of their energy conservation programs. When the state Legislature passed the Next Generation Energy Act of 2007, it mandated that utilities achieve annual efficiency gains equal to at least 1.5 percent of sales. To help that regulatory pill go down, the law instructed utility regulators to sweeten the lost-revenue compensation for utilities and their shareholders.

In the three years since the new model has been in place, it appears to be a success. Utilities are meeting the 1.5 percent efficiency target, businesses have access to an unprecedented number of rebates and efficiency programs, and the state is postponing the need to build expensive new power plants and transmission lines. The Public Utilities Commission was scheduled to consider adjustments to the model in early November.

Utilities, which typically fought efficiency requirements in the past, have now embraced them in Minnesota. A broader cultural shift is under way within more progressive utilities like Xcel Energy, where conservation is now viewed as a revenue center rather than a compliance issue, officials there say.

That change is apparent to people outside the utility who work with its rebate programs. “I’ve noticed the tone of the conversations has changed in the last few years,” says John Loheit, director of sales, marketing, and rebates for the Energy Management Collaborative, LLC, a lighting and energy management company in Plymouth. Many of its customers pay for projects using Xcel rebates, and the utility now seems more eager and flexible, he says.

These conservation programs benefit all electricity customers, whether or not they ever see a rebate check, because freeing up capacity through energy efficiency is much less expensive than building new power plants and transmission lines to meet increased demand.

One group that hasn’t always benefited, though, is utility shareholders. The Minnesota model is an attempt to remove the financial disincentive utilities confront when they spend money to lower demand for the product they sell. In 2011, Xcel’s conservation programs created more than $300 million in net benefits to its customers. Under the current formula, Xcel will be able to recoup about $50 million of that through a fee on customers’ future electricity bills, pending approval by the Public Utilities Commission.

It’s not just a handout for following the 2007 law. Utilities have fixed costs that come with building and maintaining the grid, regardless of how much electricity customers use. Utilities’ rates are based on long-term projections of costs and sales, and the conservation payout is meant to make sure utilities can cover costs in case of lower-than-projected sales.

The Minnesota Department of Commerce’s division of energy resources says the shared-savings model has been a “huge success” in getting utilities to ramp up conservation programs.

In July, though, it said the incentive could be lowered without hurting that progress.

The Minnesota Chamber of Commerce agrees. “We’re looking at every chance we can to make or keep rates competitive,” says Bill Blazar, senior vice president of public affairs and business development. “We feel it should be trimmed.”

Xcel has said that it would be willing to accept a reduction somewhere between the current incentive and the one proposed by the Department of Commerce, and that any adjustments to the model this winter are likely to be modest.

More change is needed if Minnesota wants to continue cutting its share of greenhouse-gas emissions and avoiding the cost of adding new power plants and transmission. One policy worth exploring is decoupling, a way of setting rates that removes the incentive to grow sales. Utilities and regulators would continue setting rates based on covering fixed costs, plus a profit, with projected sales. If sales fall below projections, customers would make up the difference with a surcharge in the next cycle. If sales exceed projections, the utility would have to refund the surplus to customers instead of pocketing it, as it does now.

“To really get utilities into a frame of mind of vigorously pursuing energy efficiency as a resource, I think decoupling ultimately has to be there,” says Marty Kushler, a senior fellow with the American Council for an Energy-Efficient Economy, a Washington, DC, nonprofit that advocates for energy conservation.

Decoupling pilot programs for natural gas are already under way at CenterPoint Energy, Inc., and Minnesota Energy Resources Corporation. And with the state’s electricity consumption on a plateau in recent years, it would be surprising if more utilities weren’t at least studying decoupling, which rewards them for maintaining service rather than increasing sales. Done right, decoupling could protect ratepayers from rising costs and ensure that utilities have enough money to cover their expenses.

While Minnesota utilities are already doing a good job with conservation, says Beth Goodpaster, clean-energy program director for the nonprofit Minnesota Center for Environmental Advocacy, the state shouldn’t rest on its 2007 legislative laurels: “We should be thinking outside the box, and think of new opportunities that are developing [for utilities to] make money selling efficiency.”

Dan Haugen is an energy journalism fellow with Midwest Energy News and a regular TCB contributor. Contact him at dan@danhaugen.com

As the demand for energy is rising at record rates, billions of dollars in incentives are being allocated at the federal, state and local level across the U.S. to spur energy efficiency programs.

If you haven’t had enough of Gangnam, a Texas homeowner uses over 25,000 LED lights to unveil a Gangnam Style light show.  Happy Holidays

Our LED lights are not only efficient, but also very safe.

One of our lights damaged during shipment shows that it is safe to touch and still operates.  A damaged Fluorescent tube would have likely shattered and dropped harmful mercury.  LED is free of any mercury and does not shatter.

95% of US Cities Satisfied with LED Streetlights

Among cities and municipalities in the United States that have implemented Light-Emitting Diode (LED) streetlight projects, 95% were satisfied with the overall performance of the streetlights. The more efficient LED streetlights were found to save on average nearly 60% in combined energy and maintenance costs, according to a new survey published today by Washington, DC-based research firm Northeast Group, LLC. The firm surveyed nearly 100 cities and municipalities across the US that have implemented some form of LED streetlight initiatives.  The results were published today in the new study “United States Smart Infrastructure: LED and Smart Street Lighting.”
“LED streetlights are transforming cities and municipalities across the US,” said Northeast Group. “Not only are LEDs helping save money through reduced energy and maintenance costs, but 95% of the cities and municipalities we surveyed said both they and residents were very happy with the performance and light quality of the new streetlights. Many reported that law enforcement officials in particular had praised the lights for improving visibility and public safety. The success of these LED projects is also helping to set the stage for more advanced ‘smart’ street lighting systems, which will reduce energy consumption by a further 20-30%. In total, the LED and smart street lighting markets are expected to reach a cumulative $4.7 billion in the US by 2025.”
But there are also some challenges facing the market. The survey revealed that 45% of the respondents had funded their LED streetlight projects almost entirely with stimulus funding from the American Recovery and Reinvestment Act (ARRA). A further 36% relied on ARRA funding or other grants for at least a portion of their financing. As this stimulus funding recedes, financing for future LED streetlight projects has been more difficult to secure, despite the success of early projects. However, the price of LED streetlights is steadily falling and on track to hit parity with legacy technology within a few years. As a result, the payback period for these projects is becoming more favorable and within the reaches of budget-constrained cities and municipalities. As the LED streetlight business case continues to improve, the number of projects is expected to expand rapidly in the coming years.
Northeast Group’s study identified nearly 400 US cities and municipalities that had either already begun or had considered installing LED streetlights. After conducting interviews with nearly 100 of them, the survey was able to draw conclusions such as the actual savings captured by pilot projects and full deployments, the public reaction, the most common financing mechanisms, and the vendors serving this market. Northeast Group found that over 25 vendors were already active in the US LED streetlight market and that, with expected strong growth, the market will continue to attract many vendors offering diverse solutions.

A Dunkin Donuts franchise has chosen Solus LED to retrofit a portion of its exterior lighting as a test study for LED lighting.  By using Seesmart lights provided by Solus LED, Dunkin will  reduce its wattage for its exterior wall  lighting by 88%.  Solus looks forward to working with Dunkin Donuts on this project. 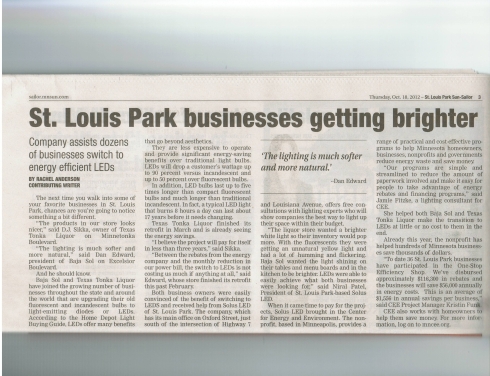 Will the future of shopping be guided by LED lights and smart phones?

Indoor mapping and location services will create a new world of advertising and social networking services, but no technologies have proven the winners yet. A Massachusetts startup has come up with an idea of combining digital lighting with smart phones to make that world a reality.